Turning the Corner on Highway Lanes

A chain is no stronger than its weakest link. This fundamental concept can also be applied to roads in the sense that a road is only as effective at moving traffic as its widest (and most efficient) point. There are many examples in Ottawa and around the world of important roads that, while considerably wide along much of their length, fatally narrow at certain points. These narrow points mean less traffic can flow through, impacting the effectiveness and capacity along the entire length for the road.

There are numerous reasons why roads may fail to maintain their full width along their entire length, including situations around left turn lanes, lack of expansion capacity, and recent changes in traffic patterns. 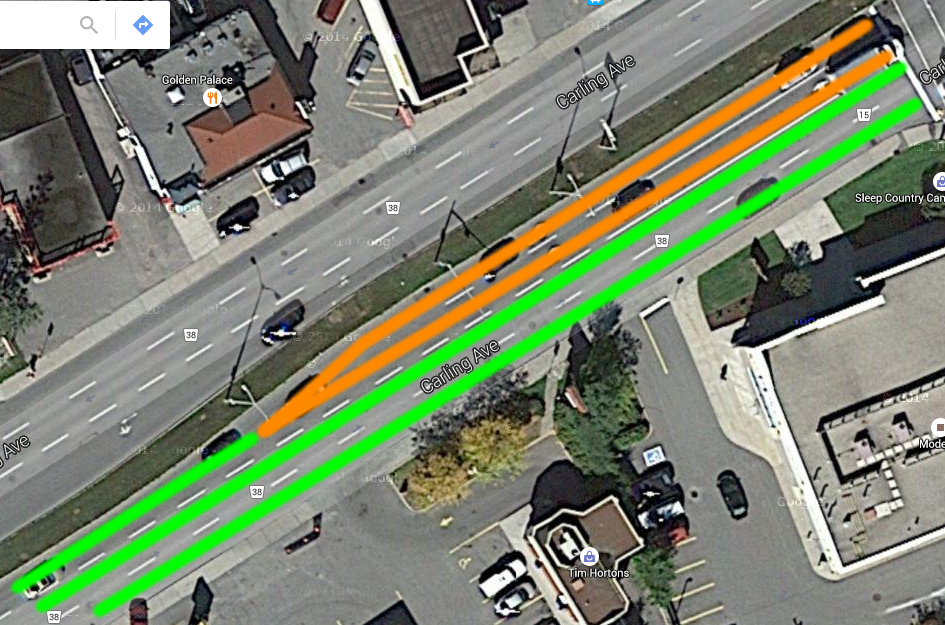 The problem of congestion at intersections can also be seen were roads have failed to be widened at the intersection. This can often this happens with a sudden increase in traffic, through bad road planning, or where there is limited room along the sides of the roads to expand into. In such situations drivers can be forced to make unprotected left turns (no dedicated turning light or lane) from lanes that also contain through-traffic. Only one car looking to make a left turn hand hold up an entire lane of through-traffic while it waits for a gap in opposing traffic. Not only is this a slow process, but can be highly dangerous with wide roads and lots of traffic to cross.

The idea of continuous road traffic flow seems to be one that is often overlooked when planning roadways. There are many examples of roads that require drivers to constantly change lanes, or make numerous changes in short succession. While there are many factors that impact the exact effect those lane change have on the traffic flow rate, there is no doubt that minimizing road width changes as well as the necessity for lane changes can reduce congestion.