With the plans for the down-town and east-side Ottawa light rail corridor complete, and beginning construction, the eyes of the city have turned to the west end for the next phase of the Ottawa light rail plan. In this piece I plan to outline the current state of rapid transit in Ottawa, the proposed Light Rail Transit (LRT) route (specifically the western section), and then identify and support a superior alternative route along Carling Ave.

As with most major transit and travel infrastructure projects in high density urban environments they phase a wide array of public opposition, and this is no exception. With the current rapid bus transit corridor connecting Kanata, Nepean, and Barrhaven through the Woodroffe transitway the majority of bus traffic is routed along the parkway until it joins up with the transit trench starting at dominion station. As it stands route is quite inefficient, but due to the legacy nature of the infrastructure this route has remained in use.

The issue that has arisen is that the city, through their plan for a western LRT link, has decided that continuing to use this outdated corridor is the best choice, even though they could take this opportunity to better situate and centralize the system.

The process of determining a western LRT route has been whittled down, outside public consultation, to four possible routes. The Green (Preferred) Line (Fig. 1) which uses the Transit trench to Dominion, hugs the south side of the Parkway along what was the CN rail-bed, heads underground with a station at Cleary Ave., underground along Richmond Road to a station at New Orchard, and then on to the Transitway at Lincoln Fields Station. The Yellow Line (Fig. 2), which is very similar to the Green Line in concept, also follows Richmond Road, but instead chooses to go through Rochester Field and then along Richmond Road at grade with at stations at Cleary and New Orchard. The Blue Line (Fig 3) follows the Transitway past Westboro Station and then heads up Churchill until Richmond, where it continues along Richmond underground making the same stops as the two previous lines. The Red Line (Fig. 4) is also very similar to the Green Line and only differs in that it travels at grade of a short distance between Woodroffe Ave. and just after New Orchard Station. The Brown Line (Fig. 5) is a combination of the Green Line (in that it uses the CN rail-bed, Cleary Station and a tunnel under Richmond) and the Magenta Line (Fig. 6) as it heads up to the Parkway at New Orchard and continues along the Parkway to Lincoln fields.

Problems with the Proposed Route

As you can see all of the proposed Lines utilize all (or most) of the existing  Transitway, and then head along Richmond Road in some manner (or in the case of the Magenta Line all the way along the Parkway). This means that given the opportunity to relocate the transit system to both better suite the layout of the city and where it has grown since it was originally built there 30 years ago, the city is instead looking to upgrade the existing infrastructure as a cost saving measure. Saving money isn’t necessarily a bad thing as ballooning expenses are not constructive either, but the problem at hand is actually whether, after waiting this long to build the system (due to financial constraints), the system should be built at all.

Problem with the People Who Don’t Like the Proposed Route

As mentioned above the Parkway and Byron options are not best for the neighbourhood or the city, and it is our job as residents of Ottawa to convey that to the city. The problem lies in that the approach taken by many of the residents of Westboro is an emotional personal appeal to the city in which they claim that the addition of this new transit connection will in some way ruin their view, property value, or tranquillity. This is the completely wrong approach to take for trying to solve the issue because the city will never make a decision based the disruption of a few people in one neighbourhood, and rightly so, because otherwise nothing in the city would ever get done. When looking at a problem like this you have to ignore personal feelings on the matter, something which can be hard to do when these decisions can impact people at such a personal level. In this situation the reality is that if the plan called for the LRT line to run through Westboro, along Richmond or the Parkway, AND this was the right solution for the city as a whole, then that should be the plan that is implemented. The problem here is that the proposed route is not in the best interest for either the neighbourhood or the city. Thus, the way to change the cities plan would be to convince them by using facts, rational arguments and research, not ones personal plight or feelings.

When considering the different possible routes the Western LRT Line could take there are really only two corridors that are north enough to pass through down-town but also open enough to allow for the introduction of a LRT line, and these two options are the Transitway/Parkway/Richmond Road option, and the Carling Ave. option (Fig. 7). As was mentioned when discussing the routes that the city has proposed for the Western LRT Line, none of them include the use of Carling Ave. The reasoning for this is threefold: firstly, that this would leave Tunny’s Pastures Station as a “spoke” off the main line, severely restricting access, and fragmenting the system. Secondly it was mentioned that the use of the northern section of the O-Train line to get south to Carling would cause the O-Train itself to have to be stopped at the Carling Station due to scheduling conflicts due to the timing and frequency of the trains. Thirdly, that the obstructions caused by the number of intersections on Carling would make it prohibitively expensive to run along Carling. And finally, that the LRT line would fracture the neighbourhood and cause unnecessary congestion in the area. Unfortunately the city has structured the planning phase such that they had previously eliminated all but the worst of the options using Carling, meaning that Carling was being represented by the worst possible route. So taking a wider look at the other options which also use Carling there is only one which is able to mitigate the majority of the major drawbacks encountered by the O-Train Line option, and that is to use Holland. This route would bring the LRT line down Holland to Carling from Tunny’s Pastures, and then along Carling strait to Lincoln Fields Station and the Western Transitway. This route has a solution for all three of the main disadvantages of Carling the the city put forward. Firstly it would would eliminating the “spoke” nature of Tunny’s Pastures Station as that would now be along the main route. As the LRT line uses Holland to get between the Transitway and Carling it would no longer be running along the O-Train line, thus eliminating the interoperability issues with the existing O-Train service. Thirdly, this route would not in fact be any more expensive to run elevated to run along Carling as the cost of tunnelling is just as expensive, and arguably more invasive during installation. Finally, the elevated line along Carling would cause no more disruption to the flow of people across Carling because, for large portions of the proposed route there are already fences stopping people from crossing where there isn’t an intersection. 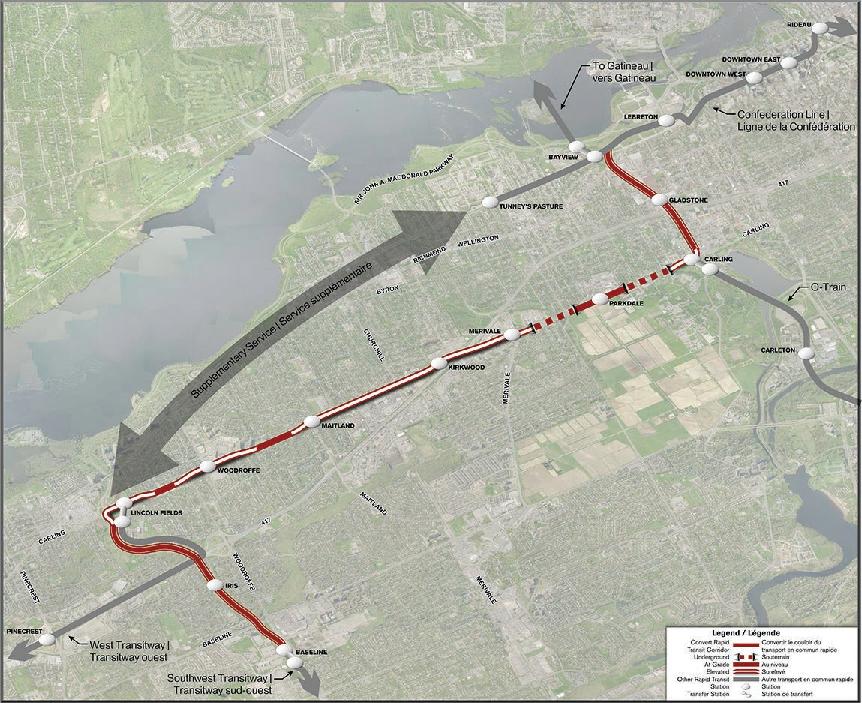 In conclusion then one can see that both the city and many residents are misguided in their aspirations for the Wester LRT line. While the city strives for the impractical goal of connecting the western suburbs with transit as well as provide service to Ottawa West and Nepean, the residents of Westboro are unwilling to take a step back and grasp the concept a few peoples comfort is not worth saving at the cost of the entire LRT system. With a few adjustments to the plan (i.e. running the line along Carling) this could be the transit system that guides Ottawa into the next few decades. Without these changes this system will be a colossal waste of time, money, and resources which will only cause people to be more hesitant about future rapid transit development.